Kristin DeGeorge (Texas, 1964) studied Fine Arts at Indiana University of Pennsylvania and Mason Gross School of the Arts, (New Jersey) and received her Bachelors of Arts in Spanish language and literature from Rutgers University (1983-87). Her passion for foreign languages took her to Spain at an early age. Her work strongly reflects the intersection of cultures, histories, artistic traditions, and the omnipresence of distance. She studied graphic design and printmaking at EINA Escola de Disseny (1989-91) in Barcelona and headed the Chromatic Research for the « Las Façanas de la Rambla » project. Permanent collections include the United States Embassy in Madrid, National Library of Spain Print Collection, Café de Colombia, and Arkansas Arts Council, among others. DeGeorge currently lives and works in France, Spain and the US. She was an interpreter/translator for many years and is the founder of the international contemporary printmaking movement “ARTïTS”. 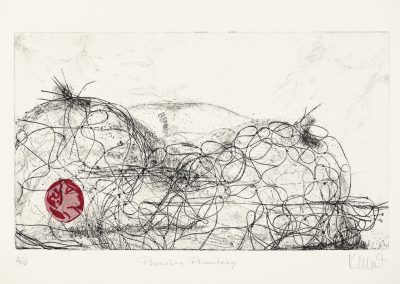 « Phocéene Phantasy » Copper plate etching, Hard and soft ground – 2017 – The image evokes commerce in past civilisations of the Mediterranean basin. We can raise many questions regarding the fish net, the ancient seal, is the figure captive, mythical? And yet the vantage point of these arrogant breasts in ecstasy may defy these interpretations. 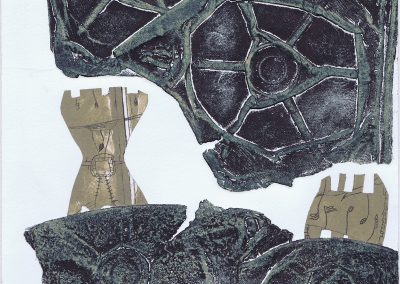 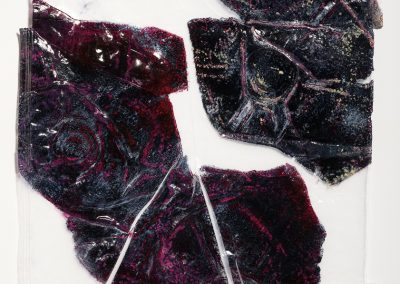 « Plastron » Collagraph on Polyethylene – 2017 – These melons are not for sale. As a continuation of my themes of women warriors, sentinels and armour, these breast plates are collagraphs made from cardboard melon crates one can see in any Southern French market.